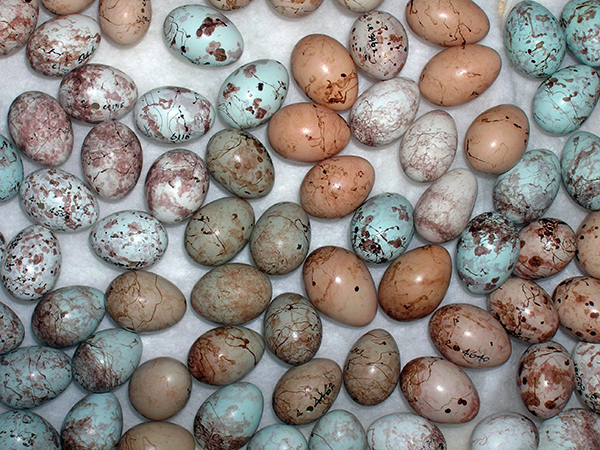 Our paper “Hosts elevate either within-clutch consistency or between-clutch distinctiveness of egg phenotypes in defence against brood parasites” has just been published in the journal Proceedings of the Royal Society of London B. In this study, led by Eleanor Caves (now at the University of California, Santa Barbara), we asked how eggs evolve in appearance in response to natural selection from parasitic eggs that mimic their own. Host often evolve adaptations better to discriminate their own eggs from parasitic eggs. Theoretically, hosts can generate their own individually-distinctive egg ‘signatures’ by laying eggs that appear similar to one another (consistency) but look very different from other individuals’ eggs (distinctiveness). In this new study, we show that host species of two African brood parasites (the warbler and weaver families, parasitised by cuckoo finches and diederik cuckoos respectively) deploy either consistency or distinctiveness, but not both, as defences, and achieve distinctiveness by combining egg colours and patterns in unpredictable combinations. This helps to resolve why past studies of these long-standing ideas have generated mixed results.

The data in the study come entirely from the late Major John Colebrook-Robjent’s egg collection, and he and Lazaro Hamusikili, his chief field assistant contributing to the collection for many years, and now our colleague in the AfricanCuckoos team, are part of the team of co-authors.

This paper is the last of three from Eleanor’s MPhil research in Choma (Caves et al. Proceedings of the Royal Society B 2015, 2017 and 2021) – congratulations Eleanor!

END_OF_DOCUMENT_TOKEN_TO_BE_REPLACED

END_OF_DOCUMENT_TOKEN_TO_BE_REPLACED
Read More News
We use cookies on our website to give you the most relevant experience by remembering your preferences and repeat visits. By clicking “Accept All”, you consent to the use of ALL the cookies. However, you may visit "Cookie Settings" to provide a controlled consent.
Cookie SettingsAccept All
Manage consent