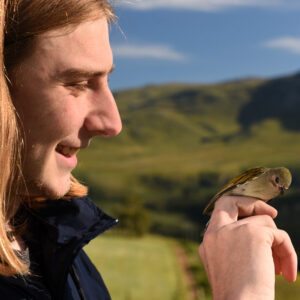 Cameron has been captivated by birds since he was a small child. His love for natural history was solidified growing up in the town of Hoedspruit, South Africa, a stone’s-throw from the famous Kruger National Park, Blyde River Canyon and Mariepskop forest. At the age of 12 he conducted a study on the choice of nesting locations by Red-headed Weavers for the Tritech Interschool Science Fair, and since then he has wanted to study ornithology.

Cameron has been fascinated by the remarkable life history of honeyguides (being both mutualists and brood parasites) since high school, making it the subject of a project for Visual Arts in his final year. He is also fascinated by the ecological consequences of bird calls as inter- and intraspecific signals.

He completed his BSc at the University of Cape Town in Applied Biology, Ecology and Evolution in 2020. In 2021, he completed BSc Honours with the African Honeyguides team at the University of Cape Town (supervised by Claire Spottiswoode and Jessica van der Wal), where he worked on the development of the guiding call of the Greater Honeyguide that functions in this species’ remarkable co-operative mutualism with humans. This work provided evidence that the guiding call develops from the calls honeyguide chicks use to beg for food from their host parents.

Still based at the University of Cape Town, he is now joining the African Cuckoos team for his MSc, looking at how brood-parasitic honeyguide chicks are able to acoustically deceive their host parents to provide them with large amounts of food. He is supervised by Claire Spottiswoode and Jess Lund.

He is passionate about scientific communication and sharing the wonders of the natural world. This has led him to be involved in the University of Cape Town’s Birding Club, chairing the club in 2020 and 2021. He is also the social media manager for Ostrich: Journal of African Ornithology, and enjoys sharing developments in African ornithological research across its social media platforms.

END_OF_DOCUMENT_TOKEN_TO_BE_REPLACED

END_OF_DOCUMENT_TOKEN_TO_BE_REPLACED
Read More News
We use cookies on our website to give you the most relevant experience by remembering your preferences and repeat visits. By clicking “Accept All”, you consent to the use of ALL the cookies. However, you may visit "Cookie Settings" to provide a controlled consent.
Cookie SettingsAccept All
Manage consent