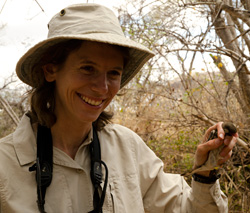 With a Greater Honeyguide in Mozambique

I am an evolutionary biologist and passionate naturalist with a particular interest in the ecology, evolution and conservation of species interactions. I run two long-term field projects on African birds: one in southern Zambia focusing on coevolution between brood-parasitic birds and the hosts that they exploit to raise their young (the focus of AfricanCuckoos.com), and one in northern Mozambique on the mutually beneficial interactions between honeyguides and the human honey-hunters with whom they cooperate to gain access to bees’ nests (the focus of AfricanHoneyguides.com). Both projects involve close cooperation with rural communities, and rely on their local field knowledge and skill.

In Cambridge, I am Principal Research Associate and the Hans Gadow Lecturer in the Department of Zoology. In Cape Town, I am the Pola Pasvolsky Chair in Conservation Biology at the FitzPatrick Institute of African Ornithology, part of the Department of Biological Sciences.

I first began field research on coevolution between brood-parasitic birds and their hosts in Zambia in early 2006 (enabled by a Junior Research Fellowship from Sidney Sussex College in Cambridge, and support from the FitzPatrick Institute at the University of Cape Town): Cuckoo Finches and their hosts, and subsequently Greater and Lesser Honeyguides, African Cuckoos, Vidua finches, and their hosts.

Most of my work is inspired by field observations and, with the help of students, postdocs and collaborators, I try to integrate field experiments with approaches drawn from other fields. I have greatly enjoyed collaborating with experts in evolutionary genetics, sensory biology, anthropology, biophysics, applied mathematics, and other fields.

Our work on host-parasite coevolution to date has focussed on two main areas: first, we’ve been interested in asking how coevolution can escalate into ongoing arms races involving defensive egg signatures in hosts, and mimetic forgeries in parasites. Second, incorporating genetic approaches, we’ve been interested in asking how host-specificity can evolve within parasitic species that exploit multiple hosts. Please see the Research and Study Systems pages on this website for more information on these topics, as well as related questions being pursued by students, postdocs and collaborators working in Zambia.

In addition to brood parasitism, I’m also fascinated by mutualistic interactions between species. In particular, we study the remarkable mutualism between human honey-hunters and Greater Honeyguides who lead them to wild bees’ nests, in Mozambique’s beautiful Niassa National Reserve and elsewhere in eastern Africa, in collaboration with the honey-hunting community of Mbamba Village and the Niassa Carnivore Project, and with the support of the European Research Council. This is the topic of a sister website, AfricanHoneyguides.com.

I’m widely interested in the evolutionary ecology of birds and have also worked on avian sociality, nest camouflage, life-history evolution, sexual selection, migration, and the conservation ecology of threatened species in the Horn of Africa and northern Mozambique (please see the links below for more information on some of these topics).

I currently serve on the Executive Council of the International Society for Behavioural Ecology, and am a Senior Research Fellow at Magdalene College, Cambridge.

END_OF_DOCUMENT_TOKEN_TO_BE_REPLACED

END_OF_DOCUMENT_TOKEN_TO_BE_REPLACED
Read More News
We use cookies on our website to give you the most relevant experience by remembering your preferences and repeat visits. By clicking “Accept All”, you consent to the use of ALL the cookies. However, you may visit "Cookie Settings" to provide a controlled consent.
Cookie SettingsAccept All
Manage consent