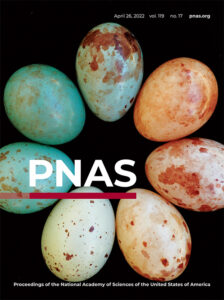 Our paper “Genetic architecture facilitates then constrains adaptation in a host-parasite coevolutionary arms race” has been published in the Proceedings of the National Academy of Sciences of the USA. In it, we address the long-standing puzzle of how exquisite mimicry of the eggs of several different host species can evolve within a single species of brood-parasitic bird. We show that in cuckoo finches in Zambia, egg mimicry of different host egg phenotypes is maternally inherited, which allows mothers to transmit host-specific adaptations to their daughters irrespective of which host species the father was raised by. This for the first time unequivocally supports an elegant hypothesis proposed by Reginald Punnett in 1933. This mechanism of inheritance has allowed egg mimicry of multiple hosts to evolve and remain distinct within cuckoo finch matrilines, that we show have been perfectly host-specific for up to two million years or more. However, we further suggest that maternal inheritance is in fact a double-edged sword for parasites, because it appears to hamper further adaptation in coevolutionary arms races with their hosts, which we show to inherit egg appearance from both parents. This study was a team effort from colleagues at the University of Cambridge and University of Cape Town (Claire Spottiswoode, Wenfei Tong, Gabriel Jamie), at Boston University (Katherine Stryjewski, Jeff DaCosta, Evan Kuras and Michael Sorenson) and in the Choma community in Zambia (Ailsa Green, Silky Hamama, Ian Taylor and Collins Moya).

For a summary of the research and photos of the eggs, their habitat, and the fieldwork in progress, please see this web story by the University of Cambridge  also see news coverage including from The Daily Mail, The Independent, Popular Science and Salon.
← Rainy season 2022 Fieldwork and teaching at APLORI, Nigeria →

END_OF_DOCUMENT_TOKEN_TO_BE_REPLACED

END_OF_DOCUMENT_TOKEN_TO_BE_REPLACED
Read More News
We use cookies on our website to give you the most relevant experience by remembering your preferences and repeat visits. By clicking “Accept All”, you consent to the use of ALL the cookies. However, you may visit "Cookie Settings" to provide a controlled consent.
Cookie SettingsAccept All
Manage consent