Introduction | In the News | Publications 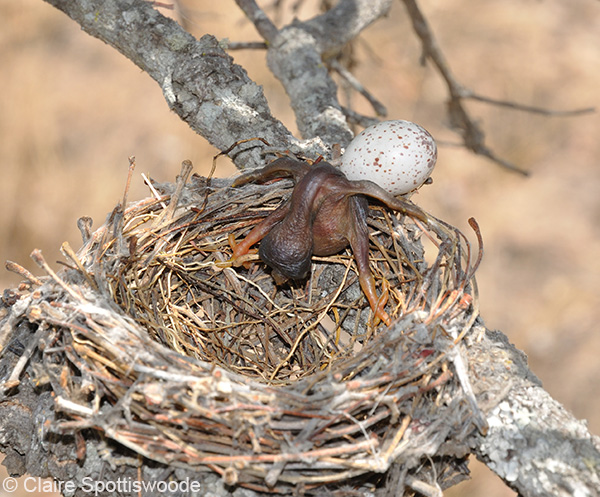 An African Cuckoo hatchling ejects the egg of a Fork-tailed Drongo.

Diederik Cuckoos Chrysococcyx caprius are small glossy cuckoos related to the bronze-cuckoos of Australasia, which have been beautifully studied by Naomi Langmore and her team at Australian National University. Diederik Cuckoos parasitise a large number of different host species (mostly weavers, bishopbirds, sparrows and buntings) and, like Common Cuckoos, they have distinct host-specific races which mimic the eggs of each of their hosts. Like African Cuckoos and Cuckoo Finches, they have to contend with a high degree of variation in egg appearance between different females of the same host species, and in turn have themselves evolved corresponding variation among females of the same cuckoo host-race. We haven’t studied Diederik Cuckoos in the field so far, but have tested various evolutionary questions on them with data previously obtained from our study area by Major John Colebrook-Robjent.

For example, we found that Diederik Cuckoo females parasitising thicker-shelled host species lay thicker-shelled eggs themselves (see publication below). This makes sense if the function of thickened eggshells in parasites is to discourage hosts from rejecting potentially parasitic eggs, lest they damage their own eggs in the process. 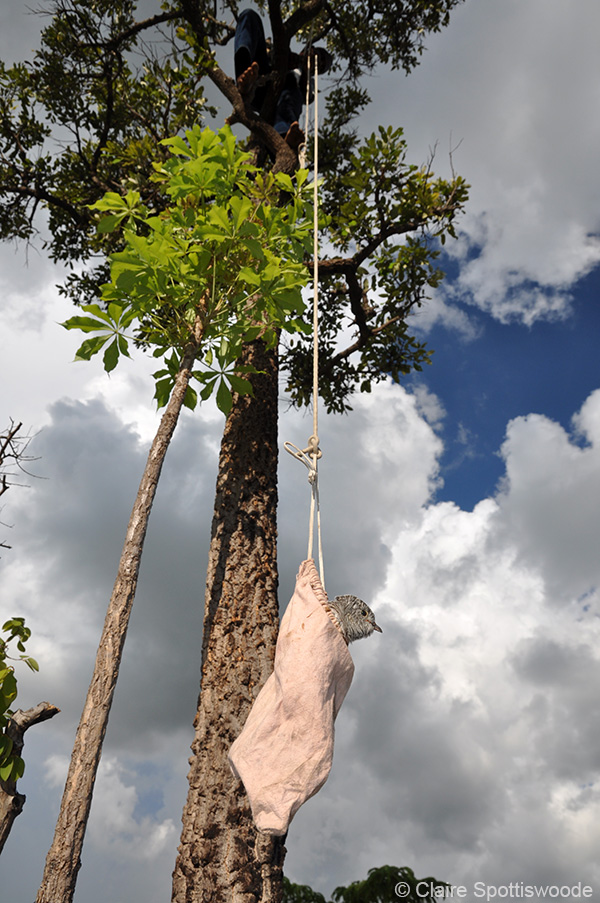 An African Cuckoo chick being lowered from a drongo nest in a Mubula (Parinari curatellifolia) tree by Collins Moya.

We have studied African Cuckoos Cuculus gularis and their interactions with their host, the Fork-tailed Drongo Dicrurus adsimilis, in the field since 2009. African Cuckoos look extremely similar (and are closely related) to the Common Cuckoo Cuculus canorus of the northern hemisphere, which has been beautifully studied for many years by scientists in Europe and Asia. Like Common Cuckoos and indeed all other cuckoo species in the subfamily Cuculinae, African Cuckoo chicks eject any host eggs or chicks from the nest a few days after hatching.

Unlike Common Cuckoos, though, African Cuckoos parasitise just one host species, so they have not evolved host-specific races that mimic the eggs of different host species: they only need to mimic drongos.

However, this is not so straightforward: drongos are formidably well-defended hosts. In addition to defending their nests highly aggressively (we often find cuckoo feathers stuck to or underneath drongo nests), Fork-tailed Drongos are extremely picky parents. Not only do they show variation in egg appearance among different females which makes it hard for a cuckoo to produce a perfect mimic (just like Cuckoo Finch hosts), but they are also extremely good at spotting a foreign egg in their nest. Consequently, African Cuckoo eggs have to be incredibly good drongo mimics in order to be accepted, and we’re often unsure ourselves whether an egg is a cuckoo’s or a drongo’s until it has hatched.

In 2012, the BBC Natural History Unit came to Choma to film our drongos and cuckoos for a forthcoming TV series.

We also found that host species of the Diederik Cuckoo defend themselves against cuckoo parasitism by evolving unpredictable visual signatures on their eggs (left): host species of many brood-parasitic birds have evolved features such as spots, squiggles and colours on their eggs that act like ‘signatures’ that are difficult for parasites to forge, helping hosts to detect and reject imposter eggs. In this paper, we show that hosts of Diedierik Cuckoos (as well as of Cuckoo Finches) in Zambia have optimised this defence by arranging signature traits in unpredictable combinations. Thus, egg signatures are individually distinctive and hard for parasites to mimic, helping hosts distinguish parasitic eggs from their own. The paper arose from MPhil research by Eleanor Caves and the data were all obtained from Major John Colebrook-Robjent’s wonderful egg collection. (Read the full paper on the journal website [Open Access])

For more information about Diederik Cuckoos please also see the website of David Lahti at Queens College, New York, who has done wonderful work on their interactions with their weaver hosts.

Cuckoo research in the news

END_OF_DOCUMENT_TOKEN_TO_BE_REPLACED

END_OF_DOCUMENT_TOKEN_TO_BE_REPLACED
Read More News
We use cookies on our website to give you the most relevant experience by remembering your preferences and repeat visits. By clicking “Accept All”, you consent to the use of ALL the cookies. However, you may visit "Cookie Settings" to provide a controlled consent.
Cookie SettingsAccept All
Manage consent