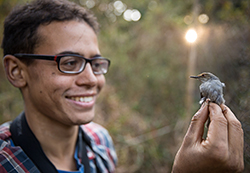 Gabriel Jamie became interested in science as a child through watching birds, first in Cape Town and then in the United Kingdom. This has resulted in a life-long avian obsession that has led him to fieldwork on birds in many places around the world. As a teenager he worked on projects studying migratory birds in the Danube Delta of Romania and on Antikythira in Greece. While doing an undergraduate degree in Natural Sciences at the University of Cambridge, Gabriel spent summers working as a research assistant studying bird communities in Peru with scientists from Oxford University and Conservation International.

After graduating, Gabriel went on to do a PhD with Professor Claire Spottiswoode at University of Cambridge conducting fieldwork in Zambia to study mimicry and speciation in the brood-parasitic Vidua finches (indigobirds and whydahs), funded by The Leverhulme Trust. As part of this work he developed a new conceptual framework for understanding how mimicry is conceived and categorised in the natural world. His research on mimicry in the Vidua finches was published in the journal Evolution where it was featured on the front cover and was awarded the Society for the Study of Evolution President’s Award for Outstanding Paper published in Evolution. The research was also featured in a recent BBC and Netflix documentary, Attenborough’s Life in Colour, for which Gabriel was a scientific consultant during the filming which took place at the field site in Choma.

Gabriel went on to take up a BBSRC-funded post-doctoral research associate position at the University of Cambridge where his work has focussed on the brood-parasitic Cuckoo Finch (Anomalospiza imberbis) and its Tawny-flanked Prinia (Prinia subflava) hosts. Prinias have evolved incredibly diverse eggs which vary dramatically in colour and pattern between individuals. In collaboration with Professor Michael Sorenson of Boston University and Professor Claire Spottiswoode of Cambridge/University of Cape Town, Gabriel is currently investigating the genetic basis of this diversity and the consequences of this genetic architecture for the co-evolutionary trajectories in the ongoing arms race between prinias and their Cuckoo Finch parasites. More generally he is researching the evolution of polymorphisms across species radiations as explored in a recent article co-written with Dr Joana Meier in Trends in Ecology and Evolution. This paper was selected as the Trends Editor’s Pick and featured on the front cover.

In 2021, Gabriel was awarded a Leverhulme Early Career Research Fellowship allowing him to build on his previous work with Professor Claire Spottiswoode and Dr Joana Meier to extend his investigations into the origins and evolution of polymorphisms beyond single species in order to understand their dynamics across species radiations. To explore these concepts, Gabriel is using the avian family Cisticolidae, and in particular the genus Cisticola, as a model system to investigate the evolution of polymorphisms across a species-rich African radiation.

Gabriel is a passionate field biologist and has been involved in ornithological expeditions around the world to study poorly-known species and understudied habitats with a particular focus on African biodiversity. He is a Research Associate at the FitzPatrick Institute of African Ornithology at the University of Cape Town. In November 2016, Gabriel was part of an expedition to the Njesi Plateau in northern Mozambique with researchers from BINCO. Together with Sam Jones, they discovered new populations of the highly endangered Mozambican Tailorbird (Artisornis sousae) and Dapplethroat (Modulatrix orostruthus) as well as finding two species previously unrecorded from Mozambique (publication here).

END_OF_DOCUMENT_TOKEN_TO_BE_REPLACED

END_OF_DOCUMENT_TOKEN_TO_BE_REPLACED
Read More News
We use cookies on our website to give you the most relevant experience by remembering your preferences and repeat visits. By clicking “Accept All”, you consent to the use of ALL the cookies. However, you may visit "Cookie Settings" to provide a controlled consent.
Cookie SettingsAccept All
Manage consent