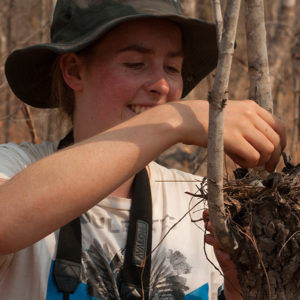 Mairenn is an MPhil student at the University of Cambridge, exploring the co-evolutionary arms race between hosts and brood parasites in Zambia. She remains driven by the same curiosity that spurred her interest in science from a young age (despite early set-backs including a failed experiment to grow a haribo tree).

Graduating in Natural Sciences in 2019, her undergraduate degree focussed her fascination with behavioural ecology, conservation and evolution.  She worked on various projects, including the impact of parasitic plants on invasive Oxalis, the function of buccal oscillations in túngara frogs, and interactions between pollen beetles and rock roses. She was also an intern with the Insect Ecology group in Cambridge, examining invertebrate diversity across ancient and recently planted woodland. In her final year project, she investigated behavioural responses to kleptoparasitism risk in sticklebacks, supervised by Professor Nick Davies. Across these diverse taxa, interactions between individuals and species emerged as a central research interest.

For her MPhil, supervised by Prof. Claire Spottiswoode, Mairenn is working with African cuckoos (Cuculus gularis)and their fork-tailed drongo hosts (Dicrurus adsimilis). The project investigates the trade-offs involved when parasites target aggressive hosts – focussing on front-line defences as well as nest survival rates. It also explores evidence for edge effects on these species at the study site, which is a matrix of farmland and miombo woodland.

During this year’s British Science Week, we’ve been engaging with local school children in Cambridgeshire. Mairenn Attwood led interactive talks at the Thomas Clarkson Academy in Wisbech,  a school partnered with ‘Teach First’ (a charity aimed at reducing educational inequality).

END_OF_DOCUMENT_TOKEN_TO_BE_REPLACED

Our paper “Limits to host colonization and speciation in a radiation of parasitic finches” has just been published in the journal Behavioral Ecology. In this study, led by Dr Gabriel Jamie, we explored the factors which limited the colonisation of new hosts by brood-parasitic Vidua finches. Speciation in these birds is closely connected with the colonisation of new hosts. Therefore, if we can understand what limits this process, we can understand what has limited the diversification of this radiation.

END_OF_DOCUMENT_TOKEN_TO_BE_REPLACED

The amazing mimicry shown by nestling Pin-tailed Whydahs of their Common Waxbill hosts is showcased in David Attenborough’s Life in Colour the latest natural history documentary on BBC One. Filming of this sequence by Nick Green and Max Hug Williams of Humble Bee Films took place at our field site in Choma, Zambia, with Dr Gabriel Jamie acting as scientific consultant and contributing sound recordings.

You can watch the sequence in Episode 2: “Hiding in Colour” on BBC iPlayer.