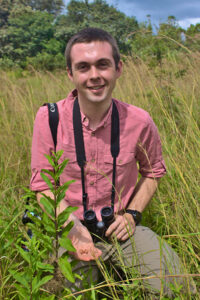 My research focusses on the evolution of animal and plant signals, particularly in the context of speciation and co-evolutionary interactions between species. I combine behavioural experiments in the field and lab with genomic data to get a truly holistic view of the evolutionary process.

I am fascinated by natural history and the ways in which elegant experiments and genetic analysis can be used to explain the diversity of Life around us. I became interested in science as a child while learning about the extraordinary collection of plants which is housed the Oxford Botanic Garden, where I grew up. As an undergraduate in Cambridge I was able to work on a range of projects, including investigating the genetic basis of wing-pattern signalling in Heliconius butterflies in the central American tropics, and the development of pollinator-attracting signals in Hibiscus flowers. My thesis project, supervised by Andrew Tanentzap, explored the rapid phenotypic and genomic evolutionary responses of Canadian freshwater fleas (Daphnia pulicaria) following invasion of the predatory spiny water-flea (Bythotrephes longimanus).

These early experiences focussed my interests on the evolution of signals and sensory systems during biological diversification. After graduating, I joined the African Cuckoos team. Working with Claire Spottiswoode, Tanmay Dixit, and Nick Horrocks, I am investigating whether whether warbler and weaver host species have evolved eggs which are more vulnerable to thermal or UV damage as a consequence of their arms race with brood-parasitic cuckoo finches. This was prompted by observations that darker (red & olive) eggs have been seen popping during especially hot breeding seasons.

Alongside this work, I began a PhD in 2022 in Cambridge with Joana Meier, for which I am studying genomic hybridisation and mating signal evolution in two spectacular biological radiations: the peacock spiders of Australia (Maratus spp.) and the ithomiine butterflies of South America (Maratus & Mechanitis spp.). I have also worked in Switzerland on patterns of hybridisation and colour evolution in wall lizards (Podarcis muralis).

With my dual background in field-based natural history and lab-based genetics, I am passionate about integrating often disparate strands of biological research — genomic, behavioural, and physiological — to explain natural phenomena. I’m always keen to communicate these findings to the public, especially those living in the places where we are so fortunate to conduct our fieldwork.

END_OF_DOCUMENT_TOKEN_TO_BE_REPLACED

END_OF_DOCUMENT_TOKEN_TO_BE_REPLACED
Read More News
We use cookies on our website to give you the most relevant experience by remembering your preferences and repeat visits. By clicking “Accept All”, you consent to the use of ALL the cookies. However, you may visit "Cookie Settings" to provide a controlled consent.
Cookie SettingsAccept All
Manage consent