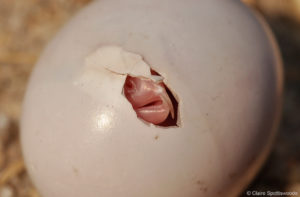 Stephanie McClelland’s paper entitled “Embryo movement is more frequent in avian brood parasites than birds with parental reproductive strategies” has been published in Proceedings of the Royal Society B.  Stephanie measured embryonic movement of brood parasites and their hosts at sites all over the world. She found that compared to hosts and other non-parasitic birds, brood-parasitic birds show elevated muscle movement while still in the egg, which might help to strengthen their muscles so they can more effectively  kill or outcompete host chicks as soon as they hatch. At our study site in Zambia, Stephanie collaborated with several members of the African Cuckoos team, including Tanmay Dixit, Jess Lund, Silky Hamama, Luke McClean and Claire Spottiswoode. The data from this site focused on honeyguides, cuckoo finches, and Vidua finches, as well as their respective hosts. The study was covered by press articles in The Atlantic and The Daily Mail. Well done Steph and everyone else on the team!

END_OF_DOCUMENT_TOKEN_TO_BE_REPLACED

END_OF_DOCUMENT_TOKEN_TO_BE_REPLACED
Read More News
We use cookies on our website to give you the most relevant experience by remembering your preferences and repeat visits. By clicking “Accept All”, you consent to the use of ALL the cookies. However, you may visit "Cookie Settings" to provide a controlled consent.
Cookie SettingsAccept All
Manage consent